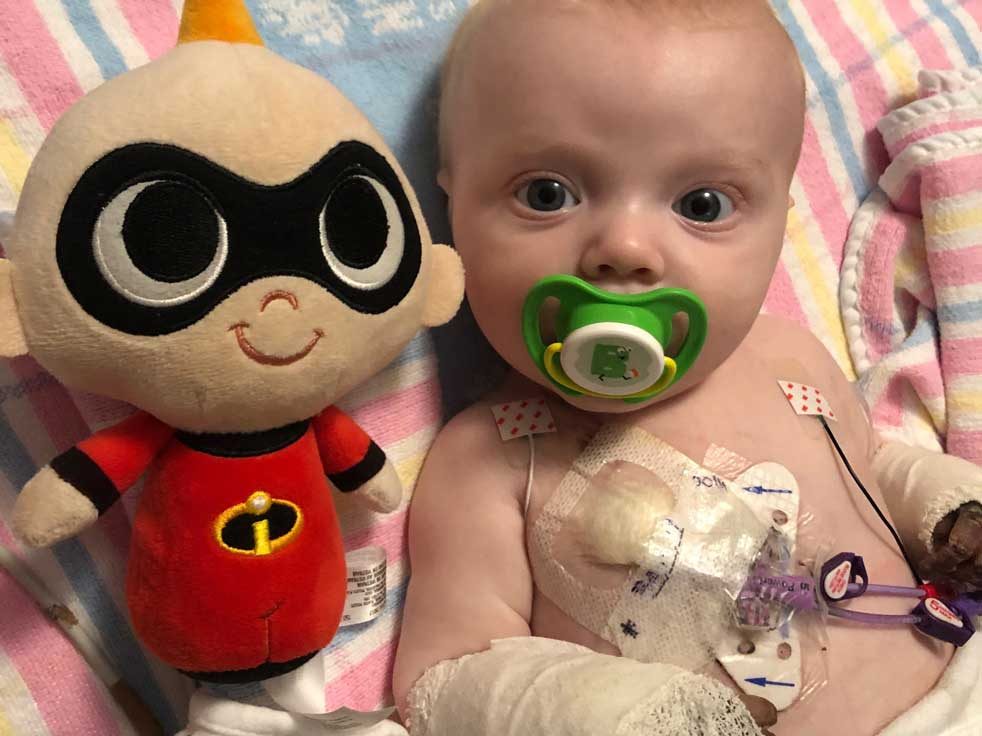 During a family holiday in the Gold Coast last October, Logan developed a rash, began feeling lethargic and vomiting bile. Over the next three months, Logan would undergo numerous tests, be placed on life support, and have a third of each arm amputated as well as all the toes on his left foot due to lost blood flow.

Affecting between three and 10 children every 100,000 in Australia, Infantile Polyarteritis Nodosa is a rare autoimmune disease causing inflammation and narrowing of blood vessels (arteries, veins and capillaries) that carry blood to and from the heart and the body’s organs. It affects people of all ages, races and gender.

In Logan’s case, the symptoms became severe very quickly and he was placed on life support four days after presenting with initial symptoms. After trying various medications and treatments, Logan was started on chemotherapy to suppress his immune system. He was then flown from Brisbane to the Intensive Care Unit at The Children’s Hospital at Westmead, where he continued chemotherapy.

It had been a mere 13 days between Logan’s first visit to the hospital on the Gold Coast and his arrival at The Children’s Hospital at Westmead.

“It was an extremely traumatic experience that has changed our lives forever. Whilst Logan was on life support in Brisbane Children’s Hospital, we were placed into a room with the most elite paediatric specialists, most of whom had exhausted all treatments for Logan. Nothing seemed to be working. However, Logan’s fighting strength, coupled with one last hope – effective chemotherapy treatment – saw Logan awaken several days later. That day was the most eye-opening day for us as parents. Cherish every moment,” said Logan’s mum, Shaneace Currie.

Dr Jeffrey Chaitow, Head of the Rheumatology Department at the Sydney Children’s Hospitals Network, was pivotal in managing Logan’s condition and recovery, and continues to treat Logan today.

“By the time Logan arrived at The Children’s Hospital at Westmead, I concluded that he had Infantile Polyarteritis Nodosa, which is a severe form of systemic vasculitis. Logan’s condition also caused blockage of arteries to his hands and feet resulting in gangrene and, later, bilateral forearm amputation as well as amputation of all the toes on his left foot,” said Dr Chaitow.

Logan’s situation required close collaboration between multiple health professionals and services who all contributed various expertise to his recovery, highlighting the value of activating shared services during critical situations.

In addition to seeing Dr Chaitow every three months, Logan visits a cardiologist to make sure his heart looks good and functions properly. 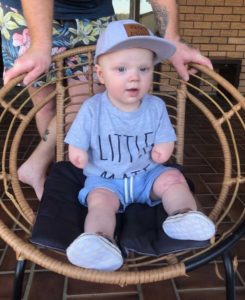 During the crisis last October, Logan’s right coronary artery became completely blocked which combined with the lack of blood flow caused his heart to work harder.

Logan’s heart muscle continues to function normally, however, the extent of damage is unknown and he may require heart surgery when he’s older.

Logan has also started seeing the Limb Deficiency clinic at The Children’s Hospital at Westmead to help with the movement, strength and development of his left foot.

He undergoes therapy three times a week at HNEkidsRehab where he’s learning to tolerate his prostheses, lift his arms with and without prostheses, catch up on age-appropriate motor development, strengthen his upper limb skills, stand and walk on his own. Undergoing regular therapy has had a profound and positive impact on Logan’s recovery allowing him to get on track with normal development despite his unique circumstances.

“Logan has been seen in his home, at our clinics and in hospital by the HNEkidsRehab multidisciplinary team. The dedication of his parents and Logan’s fighting spirit ensure Logan engages with his therapy team and joyfully participates in his sessions. HNEkidsRehab look forward to continued collaboration with the many specialist services involved in Logan’s ongoing rehabilitation,” said Sharon Fenwick, Clinical Nurse Consultant at HNEkidsRehab. 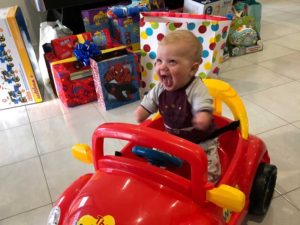 It’s certainly been a tough start to life for this courageous little boy with five hospital admissions and 100 outpatient visits in his first year of life.

However, with the combined effort of all those involved in treating his condition and associated complications, managing his rehabilitation and assisting in his recovery – as well as the love and care of his parents – Logan is in safe hands.

“We are so very thankful to Logan’s multidisciplinary medical teams that have contributed to saving his life and assisted in his road to recovery and rehabilitation,” said Matthew Currie, Logan’s dad.